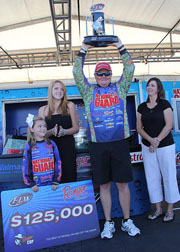 BassFans who’ve followed Mark Rose’s career know that not too long ago, he made a concerted effort to add another facet to his fishing skill set. He’d already built a reputation as a shallow-water specialist, but felt it was necessary to learn the nuances of offshore structure and how bass related to it, especially on the lakes along the Tennessee River chain.

He wasn’t just concerned with what baits worked best, though. He spent hours upon hours on the water, idling around and examining his sonar screen to watch how fish were relating to changes in current and bait movement on the ledges that the Tennessee River is famous for. He’s to a point now where he can pull up on a school of fish, no matter how small, and get a good feel for whether they’re in a feeding mood or not.

“I’ve got a really good friend who’s one of the best I know at it named Randy Haynes,” Rose said. “I spent some time with Randy one winter about 5 years ago and I took what was I taught and tried to take it to the next level. Three days a week, we’re on the phone talking about ledge fishing. It’s pretty cool to know someone who has such a passion for it like I do because I love it.

“It’s really revived my career so to speak. You do this for 13 years and you start to get a little bit of complacency or a little bit of burn out from time to time and it’s good to have something that you really enjoy.”

This past weekend, Haynes was on hand to watch his friend close out a dominating win at the Wheeler Lake FLW Tour Open. Rose virtually won the event with a massive 21-06 stringer on day 1 and never looked back as his lead gradually swelled through the event from 3 1/2 pounds to a winning margin of more than than 12 1/2 over Luke Clausen.

His lightest bag of the week was 15-10 and if he’d weighed that all 4 days, he still would’ve won by a comfortable margin. His 4-day total of 71-06 was thought to be simply unattainable based on the time of year, the pre-fall transition conditions and Wheeler’s recent weakened reputation.

“I really didn’t know coming in how Wheeler was going to fish,” he said. “I’d heard that in some local tournament that it’d been taking 14 to 15 pounds per day to win, but I also knew that I’d caught a couple big ones in practice and knew the potential was there.”

Here’s how he did it.

The pre-tournament practice session was highlighted by dreary, rainy conditions that put a significant amout of water in the river system. It messed up some shallow-water areas in creeks and there was no doubt the Tennessee Valley Authority was going to be moving plenty of current through the week to get levels back to normal. Those factors plus his affinity for deep-water structure led Rose away from the bank as he knew the deeper fish would be more immune to any impending changes in the weather.

“Any time I’m on the Tennessee River this time of year, I’m looking deep and I was able to come up with three areas that had them,” he said. “I spent lots of time looking for other stuff in practice – other deep spots out on the river, but I couldn’t find anything. All three of these areas were really close together. They were in one of the clearer creeks on the lower end and it was the only place I could find anything off shore.”

The areas he pinpointed were on the lower end of the lake, toward the Wilson Dam and featured a mix of mussel beds and scattered stumps on the bottom in 21 to 25 feet of water. He stuck a couple decent fish in practice and decided that’d be where he’d at least start the tournament.

When the tournament kicked off, the weather had done a 180-degree shift from practice. Cloudless skies and a serious cold front and moved in the night before day 1 and had most of the field scrambling to check on areas that held or produced fish in practice.

Meanwhile, Rose got busy on putting together the best stringer of the event, targeting his deep-water area and scoping out some possible shallow-water Plan-B spots. He caught only seven keepers, but the best five weighed 21-06.

“Any time you can have over 20 pounds, it’s a special day on the water no matter where you’re at in the country,” he said. “But to be on a little tougher fishery, I was definitely really surprised and excited. I knew then that I’d just leap-frogged over a bunch of people and as long as I could maintain my consistency I had another good shot at wrapping up another win on the Tennessee River.

“I wasn’t really worried about the weather or the wind. These fish were down where the water was a little clearer and I just felt like I could give them a different presentation. If the wind blew I could throw something heavier down there. The temperature didn’t affect them as much either because they were so deep.”

He came through with 17-08 on day 2 as he began to understand more what presentations triggered the better bites.

“I fished it like I always do – just read the fish and every day it seemed like I had to give them something different, but the crankbait always produced my bigger ones every day,” he said.

He did employ the long-lining method to help his shad-imitating plugs reach the target depth, but he wasn’t emptying his entire spool of line. 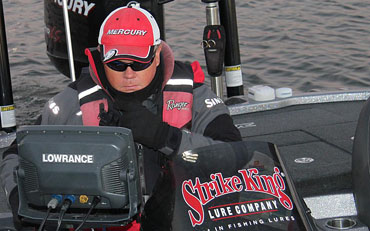 “I’d get as tight as I could to the spot without getting on top of my fish and then I’d make a long cast and just back off 50 to 75 yards on my spool,” he said. “A big key to my success this week was casting distance and it’s been a big key on all of my wins on the Tennessee River.”

He managed 15-10 on day 3 and began to worry if his spots would hold up for another day. Luckily, he’d built a 7-pound lead and as it turned out there were plenty of willing fish in his primary area as he hammered 16-14 to win in convincing fashion.

He also relied on a 10-inch worm and got some key bites on the final day with a football head jig.

“That Strike King football jig really bailed me out (on day 4) because when I needed those last two keepers, I got them and it helped me to relax and fish harder the rest of the day,” he said.

> While Rose fished in one of the creeks on the lower end of the lake, there was still considerable current moving through the area and it made it easier to target the fish.

“There was a lot of current early on in the week and the fish like to set up on wood this time of year,” he said. “It creates the perfect ambush spots.”

> When he noticed the fish were bunched up or in a negative mood, he’d drop a big spoon down to “bust them up,” he said.

“When I’d see them down there and they weren’t biting, I used the spoon more as a triggering mechanism,” he added. “It wasn’t so much to get them to bite. If they’re tight and balled up, that means they’re not wanting to do anything. It was similar to bed-fishing. The fish won’t eat because they want to eat. They just do it out of instinct. You can throw a bigger bait to irritate them, then come back with a more finesse bait to get them to bite.”

> A Texas-rigged 10” worm also produced some weigh fish this week and he mixed in a Strike King Sexy Spoon from time to time.

> Main factor in his success – “My Lowrance HDS-10s with StructureScan. When I’m on the Tennessee River, it’s what I have to have. I would not have been successful in the tournaments I’ve fished without it.”

> Performance edge – “My Mercury Optimax 250 Pro XS (engine). At the PAA last week, I ws running 100 miles round trip for 3 days and then here I was running from takeoff all the way to the (Wilson) Dam and back. When I need it to count in these big Top 10s, it’s performed flawlessly. I also utilized my HydroWave as well through the week and it gave me added confidence.”