Some professional anglers view their first tour-level win as a defining moment in their career – a milestone that validates their status as pros and takes them to a level they hadn't previously reached.

Not so for Mark Rose.

The Arkansan topped the field at Pickwick this year for his first FLW Tour triumph in his 12th season of full-time competition. It was the highlight of an extremely strong campaign that saw him notch his second straight 3rd-place finish in the Angler of the Year (AOY) race.

The win and the accompanying six-figure check were nice, to be sure, but he doesn't look upon the achievement as any sort of watershed occurrence. 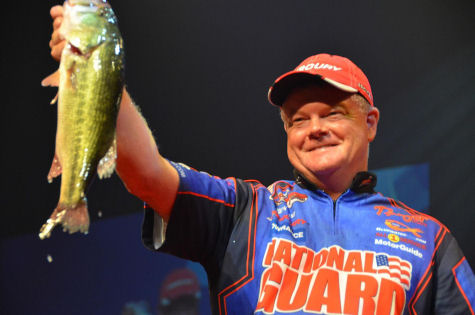 "I don't let things like that define me," he said. "I go out and do the best I can every day, and if I'm doing that and fishing well and making a living at it, I'm satisfied.

"Before that I had a couple of wins on the (FLW Series, now the Tour Opens) side, and I don't know that those fields aren't stronger because you have some B.A.S.S. guys and the top FLW guys, along with a few of the best locals. I think our sport puts a lot of emphasis on (tour) wins, but I don't look at it as a pinnacle."

The Pickwick win may not have changed the 40-year-old Rose much, but he's a far different angler than when he launched his pro career back in the late 1990s. For example, he might be more well-known now for his offshore work than anything else, but there was a time in the not-too-distant past when he had little clue about how to catch ledge-dwelling fish.

"I had a lot to learn – there were a lot of things I just didn't know," he said. "Growing up on the (Mississippi River) delta, I was just a 'bubba fisherman.' Everything was about throwing a spinnerbait or a jig up on the banks.

"I've really enjoyed getting offshore a lot in recent years, and I've enjoyed fishing in different regions, with different styles, for different species. All that stuff took time to learn and it might've taken me a little longer than some. I'm not saying that I've got it all now, but I've been putting more and more of the pieces together and becoming a lot more comfortable with it all."

What's next on his agenda? Well, when he looks at the 2012 schedule he foresees a more shallow-oriented year (at least in the early going), and that should challenge him in another area in which he's strived to improve.

"I've learned a lot about bed-fishing recently and I'm excited about going out and trying to apply that, and I should also get a chance to get back to my roots at places like the Red River. Then there's the smallmouth at some of the places up north (Champlain and the Detroit River). I haven't had a lot of good finishes up there and I'd like to learn more about them.

"I just really like to learn. If I feel like I've got something that I'm really comfortable with, then I like to move on to something new."

Controls what He Can

Rose started the 2011 season at No. 15 in the BassFan World Rankings and recently ascended all the way to the No. 2 slot behind Kevin VanDam. Edwin Evers bumped him down one slot in the year-end tally.

He had four finishes of 6th or better during the campaign, including a 3rd at the Forrest Wood Cup. His AOY hopes were doomed by a 62nd at Hartwell, but he says he's not consumed by a quest to capture that title.

"I don't set a lot of specific goals," he said. "I always go out and do my best and my faith is real important to me, so I try to honor God in the process. I leave all the results up to Him.

"I only try to control the things that I can control. If I have boat trouble that's my fault, or if I lose fish and it's my fault, then I'm not doing well. But if things are flowing along, I'm confident that I can compete as long as I'm controlling my own variables."

He'll get another crack at Hartwell early next year, and that's an encounter he's looking forward to.

"I've still got a lot to learn about the (blueback) herring lakes, and Hartwell really left me scratching my head this year. I know it's going to be a pre-spawn bite and I'll have to go in there really paying attention.