Short days for Rose at TTBC 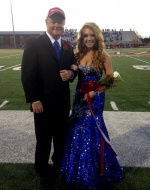 Mark Rose weighed in several hours early today on day 1 of the Toyota Texas Bass Classic at Lake Conroe and will get on the water several hours late on day 2. In between, he headed home to West Memphis, Ark. for a significant family event.

Rose's daughter Natalie, a sophomore at West Memphis High School, is part of the homecoming court and her father will serve as her escort at the football game this evening. Then he'll sleep a few hours in his own bed before getting up at 3:30 a.m. to make the 2-hour drive to Little Rock, where he'll catch a flight back to Houston. From there, it's about a 45-minute drive to Conroe.

If his plan comes off with no major hitches, he'll launch at about 10 o'clock on day 2.

"My priorities have always been faith, family and fishing, and I'm keeping them in that order tonight," he said. "There's always lots of tournaments to fish, but this is a pretty special time for one of my kids."

He made the most of his initial short day at Conroe, catching a solid 14-12 stringer. His first fish was a 6 3/4-pounder.

"It makes it a little easier when you start the day with a fish like that," he said.

He flew from Houston to Memphis this afternoon, but there were no flights available in the opposite direction on Saturday morning, which will necessitate the drive to Little Rock.